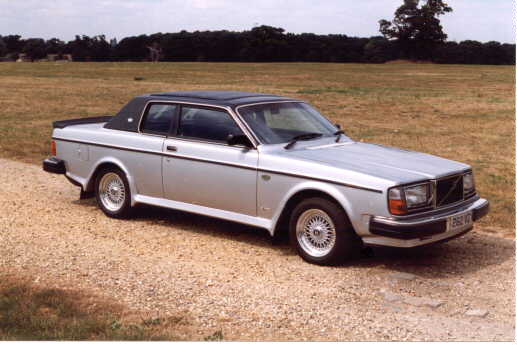 "TRE KRONER" or three crowns was the code name given to a car that was to be introduced during 1977, Volvo's Centenary Year. It was later, like most other Volvo cars (there are certain exceptions) to become just a number, "the 262C".

Swedish safety-the 200 series is well known for its safety features and has had awards bestowed on it by many countries.

Italian influence-mention the name Bertone and the mind conjures images of the Fiat X19 or an Alfa Romeo. Bertone has been associated with many automobile manufacturers over the last 40 years, although very few people are aware of the links between the Volvo Car Corporation and Bertone, initially in 1977 with the 262C, 245 Transfer, 264 TE and later in 1985 with the equally luxurious 780.

The first prototype was constructed in 1974 using a secondhand 164 saloon which was restyled by Sergio Coggiola, the Italian designer,from drawings based on ideas from Pehr Gyllenhammer while in North America, and produced by Jan Wilsgaard's styling department. The Tre Kroner prototype was only distinguishable from the production model 164 by the more acute rake to the windscreen, lowered roof line and two-door body, the three crown code name was reproduced in emblem form on the roof side panel to the rear of the side windows. This car, in my opinion, was far more stylish than any of the later production variants.

Coggiola had already produced a number of concept cars based on the Volvo 1800 series floor pan and mechanical components.

The next prototype, using 260 series components, although still featuring the three crown emblem, was in all other respects identical to the first series of production models.

A lack of production capacity led to the association with the Turin-based works of Nuccio Bertone, who were chosen for the quality of building and standard of finish. Those familiar with these cars and the corrosion that most examples suffer from, may question the reason for this choice. Cars were shipped to the Bertone works partially built, with the rest of the components in kit form to be assembled and painted.

The 262C's public debut was at the Geneva Motor Show in March 1977 with many of the motoring journalists' comments being somewhat scathing. This does not, however, seem to have been detrimental to their sales. In all, 6,622 cars were produced during the years 1977 to 1981. This was well in excess of the original planned production rate of 800 cars per year with 90 per cent destined for the United States.

Any changes to the design or mechanical construction of the standard range of 260 series were incorporated into the 262C. This leaves us with three easily identifiable variants.

Number of cars produced by model year with chassis number range are as follows:

Information received from the Volvo Car Corporation in Gothenburg, Sweden, when enquiring as to the number imported into the United Kingdom, the reply was: "Only 150-200 units were imported into the UK directly from here". There are suggestions that the 262C was introduced as "bait", i.e. something to attract punters into the showrooms, but its price certainly wasn't attractive as the following showroom price comparison between the 264 GLE, which at that time was the flagship of the range, and the 262C shows:

Although the 262C you are likely to see in the UK will be silver metallic with a black vinyl roof and black leather interior, this was not the only variant. The following colour combinations were available and there may be others I am not aware of:

The information contained in this article is as accurate as possible but due to the limited published material available in relation to the 262C it is very difficult, if not impossible, to cross-reference for verification. If any members have any further information or feel that I may have been inaccurate would they please contact me. I would also be grateful if anyone has any sales brochures, accessory brochures, workshop manuals, magazine articles, in fact anything related to 262Cs that I could beg, borrow or purchase to aid my research for a more in-depth article at a later date.